North Huntingdon EMS/Rescue
About Us

Prior to established ambulance services in the North Huntingdon, Irwin, and the North Irwin Area, local funeral directors (William Snyder, Vincent Rodgers) transported the sick and injured to local hospitals, back then hearses were not only used to transport the deceased but the living as well.

1941 saw the first official ambulance service to the area which was provided by the Irwin Volunteer Fire Department, present day their department still operates and maintains two ambulances. 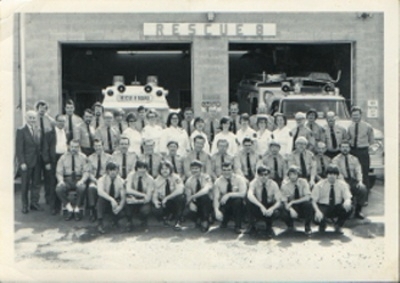 In the summer of 1959 the funeral directors notified local officials that they would discontinue providing ambulance service on January 1, 1960. The fall of 1959 saw the origins of North Huntingdon Rescue 8. Rescue 8 was molded out of North Huntingdon Township's seven fire companies, it was assigned the company number 8 by the township fire and relief association, it consisted of 50 original members all of whom were fireman. The first officers were, Mike Balko - President, Howard Weber - Vice President, Guy L. Abbot - Secretary-Treasurer, Howard Brant - Captain, Steve Perichak - 1st Lieutenant, Robert Racey - Second Lieutenant, Richard Berger - Sergeant at Arms. Trustees were Ted Colinear, Sante Corona, and Joseph Daniels.

The original members of Rescue 8 had to be fireman because of insurance reasons, when Rescue 8 had enough funds to purchase insurance for ambulance service non-fireman were accepted into Rescue 8.

Bob Peterson, from the former Peterson's Drug Store, was an American Red Cross First Aid Instructor and provided a crash course in First Aid. Mr. Snyder, from Snyder's Funeral Home provided instruction on the proper way to handle patients and how to load and unload an ambulance. 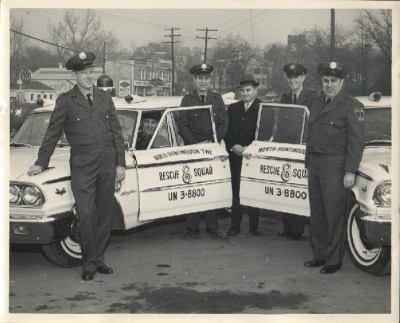 Mike Balco loaned the company money from his savings account to make a down payment for a new 1960 Ford Station Wagon. The company had it equipped with red lights, a siren, a radio, a stretcher, and a stretcher bar. A 36 unit first aid kit and an oxygen cylinder was donated to the company by the North Huntingdon Township Police Department.

The North Huntingdon Township Commissioners agreed to house the ambulance and crews in the North Huntingdon Maintenance Building located near Middle School East with the Police Department. The ambulance and duty crew were housed behind the police locker room near police dispatch and were given a table and two wooden chairs to complete any paperwork that was necessary. A second hand radio and a checker game was also donated to the company to keep those on duty entertained. In cold weather the police would allow those on duty to stay in the police locker room or with the dispatcher so long as there was no police business to conduct. 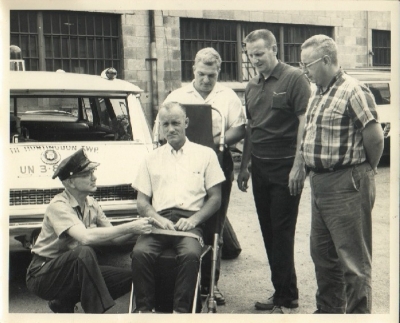 A nurses unit was formed to assist on calls when female patients were being transported alone. After a few years the nurses unit was disbanded and the nurses were added as full members. Bobby Gilkeson, one of the nurses, was elected to the position of first lieutenant, she was the first female line officer of Rescue 8. The Junior Corps was formed in 1968. Members were teenagers age 14 to 18 years. At age 18 they could become a member of the Senior Corp. Frank Corona, the son of Sam Corona, was the first Junior Corp Chief. Unfortunately the Junior Corp was dissolved in 1997 due to lack of members. 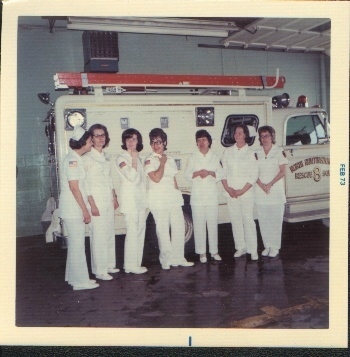 Jack Corcoran became an American Red Cross First Aid Instructor in 1962 and taught all members Advanced First Aid and CPR with the aid of the company mannequin, Resusci Annie.

Jack Corcoran and Tom Arendas were selected by the company to attend the pilot course for Emergency Medical Technician at Westmoreland County Community College. After completing 90 hours of instruction and passing written and practical examinations they became Rescue 8's first Emergency Medical Technicians in March of 1974. In the late 1970's Rescue 8 saw it's first Paramedics. 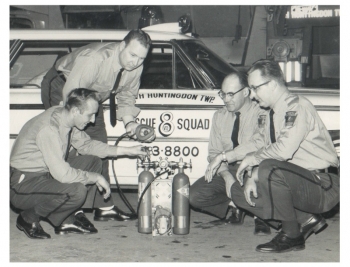 When the company outgrew the quarters provided for them in the garage, a 4 bay addition was built on the side of the facility. One of the bays was enclosed to use as a ready room. A few years later, a two bay addition was built behind the four bays exiting the side of the building. The two Ford Station Wagons expanded to three Pontiac Ambulances and a light rescue truck that could be used as an ambulance. Rescue 8 moved into it's current location on Center Highway in 1975 and remodeled again in 1997 to accommodate an increase in the demand for service.

With the educational demands that the Pennsylvania Department of Health placed on providers and the ever increasing call volume of Rescue 8, it became difficult for volunteers to commit the time and resources needed to operating a busy ambulance service alone, in 1988 paid EMS employees arrived on the scene at Rescue 8. Due to the enormous costs of operating an ambulance service Third Party Billing or Billing of Medical Insurance began in the mid 1980's. 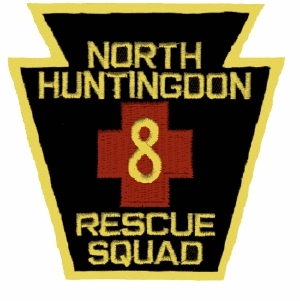 In 2008 the Board of Directors were re-organized to include volunteer members, career staff, North Huntingdon Township Commissioners and outside members of the community to make up the new board. Elected Line Officers were also eliminated and the bylaws were restructed to reflect a true non-profit organization. 2009 saw a name change which better identifies our ideals and vision for the future, even with the name change we are still also known as Rescue 8. North Huntingdon EMS/Rescue employs only the most highly trained and experienced Emergency Medical Technicians and Paramedics, most of our staff are also cross trained in many specialties such as Basic and Special Vehicle Rescue, Hazardous Materials, Rope Rescue and Firefighting. North Huntingdon EMS/Rescue provides aggressive pre-hospital care in the treatment of Heart Attacks and Strokes and employs the use of Therapeutic Hypothermia in the treatment of Cardiac Arrest. North Huntingdon EMS/Rescue has also partnered up with Allegheny General Hospital and shares it's quarters with AGH Medic 941. 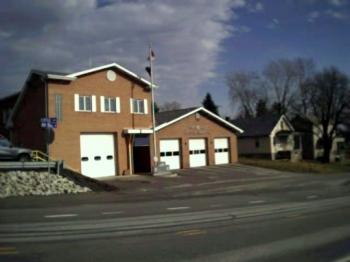